First of all, thanks to all our well-wishers since our break-in a week ago.  We keep discovering little things that we want to use that are gone, and get angry again.  This morning (Monday), the VW dealer is installing the four parts of the door handle which the thieves wrecked in order to get into the van.

But we are back to our happy routine of van life, and it is so great to be cooking for ourselves again.

Here’s one last theft-related photo: we googled “Apple Computer Dealers” and found one called the R-Store a few miles away.  We took the subway and started following the blue dotted line on Lynnell’s phone.  But the store was not there!  About ten seconds before she took this picture, I confidently pronounced that the store must have moved, because there was no such place as #1 Whatever Street.  The facial expression is a re-enactment, but I promise I only moved maybe five feet for the picture.

A few days later, after careful application of sunscreen, and parking the van in a VERY SAFE SPOT, we spent four hours in the remarkably well-preserved Roman city of Pompeii.  It’s laid out on a grid, and 20,000 people lived there, although on August 24, the day Mount Vesuvius blew its top in CE 79, a lot of folks had evacuated.   After digging two meters of soil away, the wooden roofs were gone, but the walls, doors, windows, and floors were intact.

You could easily imagine someone ducking out this back door to go buy something for dinner. 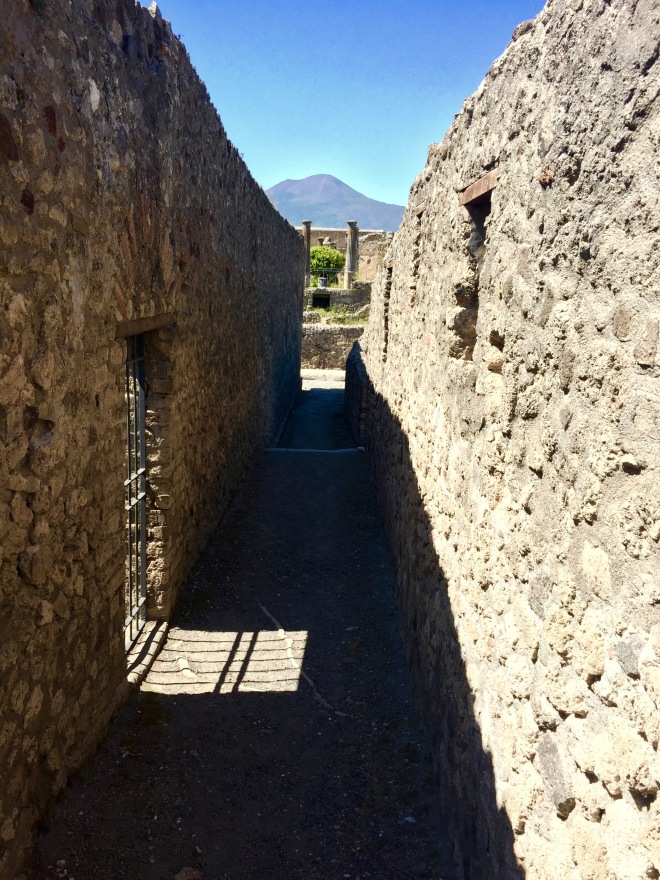 And like a lot of city dwellers today, Pompeiians apparently bought, rather than cooked, most of their meals.  Here’s what Tour Guide author Rick Steves calls “a fast food place” that opens right onto the street: 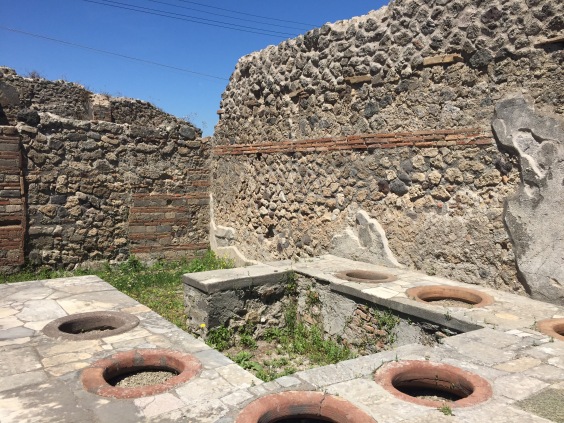 My sister, who in addition to being much younger than I am, arrived here long, long ago, sent me this picture after the blog post was published:

Pompeii was part of a network of multicultural cities and towns linked by the Globalization of the day, the Pax Romana.  Rome conquered, taxed, regulated, and pretty much made sure that the nations they ruled stayed peaceful for trade and travel.  Here was the deal Rome made: “Go ahead and have your own religions and foods.  Speak your languages.  But don’t try to separate yourself from the Empire.  You can sell your goods all over the world, and be able to buy things from far away.  We’re going to build a lot of roads (you’re welcome); aqueducts and canals (you’re welcome); and Temples (make sure you worship Caesar as well as whoever else you’ve got).  No walls on your borders unless we build them.  Be ready to send some young men to the other side of the world to fight barbarians.  That’s the deal.”

Young men could also make a name for themselves–and a lot of money if they were successful–in pro sports.  Gladiators lived in the cells around this huge training ground in Pompeii, and fought one another in the arena behind.  The modern Polish sculptor Igor Mitoraj made these great cast bronze pieces to commemorate them.

And then, after the volcano spread the horrible cloud of death and concealment, Pompeii was gone.  The people passed into anonymity, and their carefully-built city was gone. Life is short, wrote the French poet H.-F. Amiel, and we do not have much time to gladden the hearts of those who travel with us along the way.  Be quick to love.  Make haste to be kind.  And the God of compassion will go with you.

Back in Rome, we ran into some brass cobblestones every once in awhile.  We would squat and read about the mostly Jewish people who had once lived in the houses we passed.  It was awfully sobering.  All the people named on these stones were arrested, mostly on March 21, 1944.  So close to the end of the war!  By May, all had been killed, mostly in Auschwitz, far to the north and east, though a few of them did not even get that far.  The DiConsiglio family lived here.  Some were hiding at their grandfather’s hardware store across the street. The German artist Günter Demnig has installed these and other Stumbling Stones, as he calls them, in Rome and elsewhere in Europe.

Jews first came here in 161 BCE, and their religion was admired throughout the Empire.  Unlike the violent, “degraded, and shameful practices” of the Romans (Tacitus, Annals), Jews had high ethical standards and a God whose name was too holy even to pronounce.  Plenty of “pagan” Romans converted to Judaism during that time.  The Jewish community flourished here in the Middle Ages, and scholars helped translate Arabic and Greek works into Latin.  There was a famous Talmud school.   When the Jews of Spain were expelled in 1492, many came here, with no money, and were welcomed.  In other parts of Italy, they were turned away.  By 1555, however, the Pope ordered Jews into a ghetto, and forced them to wear yellow badges.  For the next three hundred years, there were more tolerant popes and less tolerant ones, and life for Jews in Rome could be comfortable and then suddenly precarious.  Besides being unwilling to convert to the state religion, Jews were also targets of suspicion because they were cosmopolitan, educated, and rootless.  Their rootlessness, of course, was the result of their having often had to relocate from whatever place they’d try to put down roots in.

80% of Italian Jews survived the Holocaust, mostly by hiding or emigrating, and some by having the good luck to be put in Italian internment camps, which often did not allow inmates to be shipped to the death camps.

The Jewish community in Rome today numbers about 25,000, according to a recent Ha’aretz article. Wikipedia says 45,000.  There are about fourteen synagogues in the city, though some are barely functional.

Not far from the DiConsiglio’s home are the ruins of the Colosseum where the Romans used to watch prisoners thrown to the lions, gladiators fighting to the death, and even mock naval battles.  They could put six feet of water in the place in short order.  It was sobering to read the placards describing how some combatants were ignited to add drama to the spectacle, and how Jewish and other slaves were put to work constructing the Colosseum.  Apparently a lot of the funds used to quarry and transport stone came from selling valuable objects stolen in the sack of Jerusalem in 70 CE.

The bronze Stumbling Stones help us remember.  Maybe my favorite work of Roman art, though, was this statue (below) of a wayfaring stranger.  We saw it at a distance, and couldn’t help going up to see if there was a face under the hood.  Sure enough, there was, as well as wounds in feet and hands.  The inscription on the wall plaque comes from Jesus’ famous story about how people would be judged when, one day, they meet their Maker.   I was a stranger, and you took me in.

The Final Exam in Life, according to Jesus is: when you cared for ones who the world regards as unimportant, you were caring for me.  If they were sick, imprisoned, homeless, or lacking food or clothing, the way you treated them will reveal your spiritual quality.   How you treat your friends and family is important, sure, but the real test is something else.  Your faith in God is revealed in how you act toward people who aren’t going to repay you or make you famous or rich.

St. Francis put it another way: Preach the Gospel.  If necessary, use words.

One thought on “Recovering and Uncovering”