Our great Minneapolis friend Phil Freshman told us last year: when we get to Jerusalem, we have to tour the underground tunnels which uncover parts of the famed Western Wall.  He had taken part in some similar archaeology on the Southern Wall, near David’s City, uncovering 3000+ year-old Jerusalem.

A lost passport (mine) meant a morning of searching and then gathering materials to get a new one, so I missed the tour of Hebron which Lynnell is now writing about.  But after a delicious lunch, I joined a group of maybe twenty tourists to see the web of chambers whose arched ceilings hold up the Muslim Quarter.

We walked down a ramp which gradually put us twenty or thirty feet underground, which is the way these things work: cities keep building up layers so that two thousand years ago is a couple of stories down, and three thousand is buried deeper still.

King Solomon built the first Temple around 950 BCE, on the second-highest ground in Jerusalem, a mountain believed to be Mt. Moriah (where Abraham prepared to sacrifice his son) and for awhile also called Mt. Zion.  Our tour guide showed us this model.

She then pointed to a thick window built into the floor, through which we could see workers doing something down at the level of that very same first temple.

A very modest second temple was built after the Babylonian captivity in 519 BCE,.

Then she pulled up another model, showing how King Herod prepared the site for a grand expansion of the second Temple in the first century BCE.  He spent 46 years all told, and raised huge sums of money by taxing his subjects.  He also built a huge palace for himself.  Our guide wryly observed that since he had no army (puppet kings don’t get to conquer), and was obsessed with his reputation, he built large monuments with his name all over them. 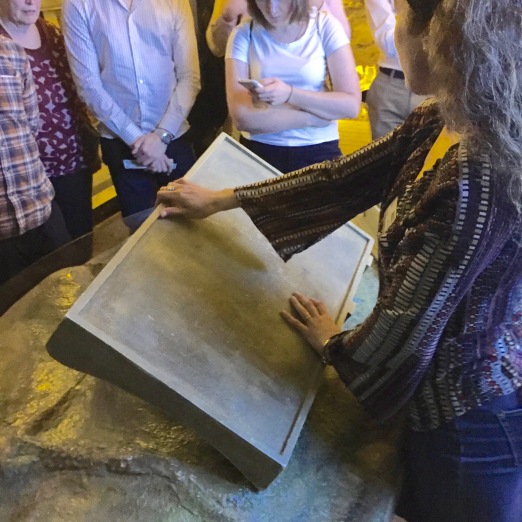 So, atop this newly-flattened mountaintop, Herod The Great built a wonder of the world, with retaining walls all around.  Unlike a lot of walls in this part of the world, this one was all about support, rather than separation or defense.

The western wall still sits on the bedrock made from stones bigger than a 1960 Buick.  The photo below is from a model of Jerusalem, 63 CE, at Yad Vashem.  The whole plaza depends on those big stones, which neither earthquakes nor erosion nor thieves looking for building materials have budged. 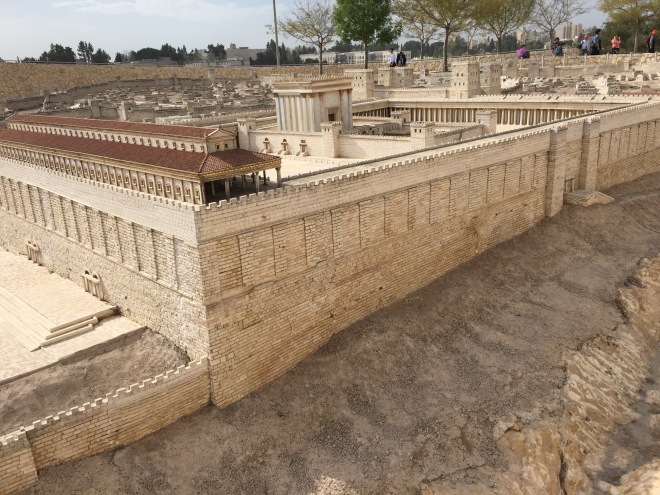 About a hundred yards of the Western Wall are now visible.  It’s the holiest Jewish Place in the world.  We’ve visited it a couple of times already, as did this group of cute Orthodox boys celebrating the occasion of receiving their first prayer books at the age of six or seven: 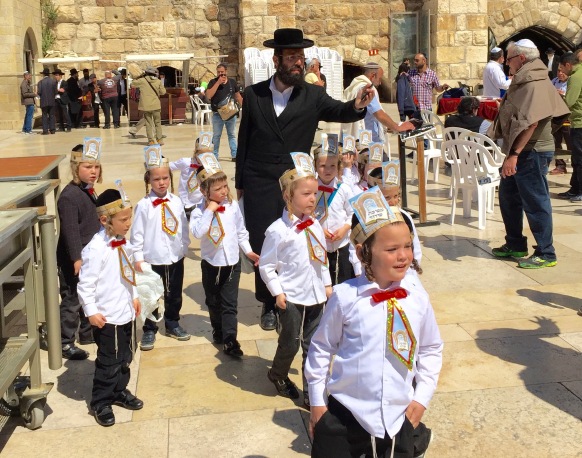 The invisible part of the Western Wall is a lot bigger.  It lies half-buried below the Muslim Quarter of Old Jerusalem.  Our friend Phil and thousands of amateur and professional archaeologists have uncovered the whole length of the Wall, and the woman below took a moment to pray, perhaps 50 yards from where the Holy of Holies used to be.

When Muslims took over Jerusalem not too long after Muhammad’s death, they restored what the Romans had destroyed.  With a massive engineering effort, they built a new neighborhood on top of hundreds of stone arches and then put the most beautiful building in Jerusalem on the plaza: The Dome of the Rock. 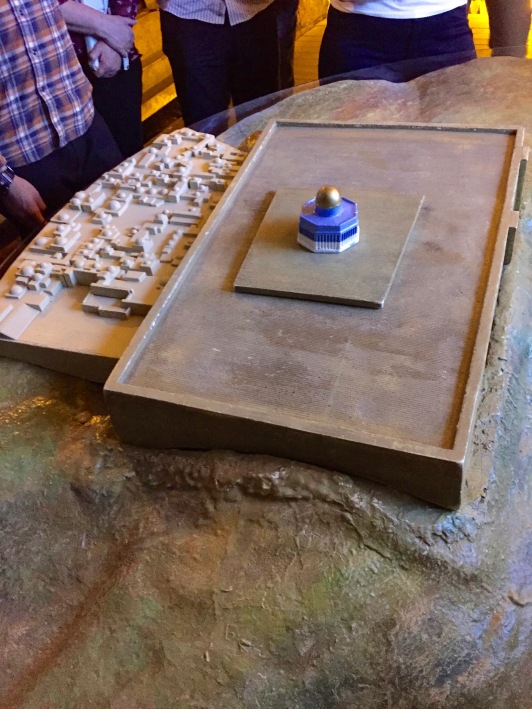 The Dome of The Rock still rises above the Western Wall, where we joined hundreds of mostly-Jewish worshippers, many putting folded paper prayers into the cracks between the two thousand year-old limestone blocks.

So we send you all our greetings from Jerusalem, known in Arabic as al-Quds, The Holy City, where Abraham, David, Mary and her son Jesus, and Muhammad all encountered God as a living presence.  Wikipedia defines Jerusalem syndrome as “a group of mental phenomena involving the presence of either religiously themed obsessive ideas, delusions or other psychosis-like experiences that are triggered by a visit to the city of Jerusalem.”  Fortunately, we don’t seem to be obsessing, delusional, or psychotic so far.

Quite the contrary, we’ve been having a wonderful but exhausting time.  Tomorrow morning, we take a rental car north to Haifa, Acre, Capernaum, and Nazareth: the greener country of Galilee.  We’ll be looking at Baha’i, Jewish, Muslim, and especially Christian places–more trees than rivers, once again–before returning to Jerusalem for the confluence of Western and Eastern Christian Holy Week and Passover.

We will be taking a course together here at St. George’s Anglican College in mostly-Arab East Jerusalem called Easter Fire, in honor of the new flame kindled on the vigil celebrating Jesus’ resurrection from the dead.  We’ll be retracing his steps and those of his Apostles 2000 years ago when the Western Wall still stood as a majestic foundation of worship of the God whose Oneness seems way too hard for us mortals to imitate.  It’s a wall of support and strength, a foundation wall mostly buried underground.

Lynnell took today’s last photo a few days ago.  It’s a poster on the Palestinian side of a much less holy western wall, the separation wall in Bethlehem:

2 thoughts on “The Western Wall”