In this part of the world, the Arabian Plate is sliding northeast and away from the African Plate, which is pulling southwest.  The gap gives us the Jordan River, the Dead Sea, and the Red Sea.  Out in the Red Sea, a newer split is happening and in maybe 30 or 40 million years, a chunk of Somalia and Ethiopia will become an island.  The Persian Gulf will be no more.  The famous Great Lakes of East Africa are in the Great Rift Valley, which is part of the whole cracking rift system.  Dr. Leakey’s Olduvai Gorge is opening wider because of this rift, and the bottom of the Dead Sea, not too far from where we sit, typing away, is getting wider and deeper.

Deep River,  Michael Row The Boat Ashore,  Roll, Jordan Roll–all those great Gospel songs describe a major river like the Mississippi.  These days, the Jordan is a creek.  Israel and Jordan are taking about 90% of its water for irrigation, so rowing a boat ashore in the Jordan might take Michael one pull on the oars.  Here I am, standing on the Jordanian side of the river, while Russian pilgrims immerse themselves on the Palestine side.

The deep-and-wide feeling here is more about the Rift Valley than the Jordan River.  With all due respect to Moses, Joshua, Elijah, John The Baptist, Jesus, and anyone else Up There who know this stuff way better than I ever will.  Three days ago, we drove west from Amman, the capital of Jordan, through giant hills covered in fresh green grass and wildflowers.

With no warning, the land up ahead of our car opened up. Some of you might recognize the feeling when you first see Lake Superior and Duluth Harbor driving north from The Cities on 35.  Or the first glimpse of the Front Range driving west from the Colorado Prairie.

I wish I could describe it better than this, but the Rift Valley felt really important.  The other side is about four miles away.  You’re on a plateau on the Jordan side, maybe 1000 feet above the valley floor.  Across the haze in the valley is another set of bluffs, which looks greener, like the proverbial grass on the other side.

Down in the valley are farms.  Really intensive-looking farms with tomato plants under mesh quonset huts.

See that pale green band on the map, running north to south, between Israel Highway 90 on the West Bank and Jordan Highway 65 on the East Bank?  That’s the Rift Valley.  The beige on the right is Jordan, on the Arabian Plate.  The beige on the left is Israel, in the Africa Plate.

If there were a lot more water, there would be a long, skinny lake here.  There used to be one, 12,000 years ago, in rainier times.

The land to the east and west dwarfs the valley.  When Moses got there, looking down from Mount Nebo on the East Bank, he must have gasped.  They’d been walking up and down this parched land for years.  Suddenly, the ground dropped in front of them and it was really green down there, and the other side looked promising too.  But poor old Moses, he didn’t get to cross over.  He died there, in the gravelly hills of Moab.  Hundreds of years later, King David’s foreign great-grandmother Ruth would decide to follow Naomi from Moab to Israel, promising, “Wherever you go, I will go; wherever you live, I will live; your people will be my people, and your God will be my God.”

Our car trip down to the Valley floor was a series of switchbacks for fifteen or twenty minutes. The dashboard thermometer went from 15 degrees (59 for American readers) on top to 22 (72) on the valley floor.  Nice weather for starting tomatoes.  It should be 80 most days in April.

An hour later, we came to the Roman ruins of Umm Qays in the northwest corner where Jordan meets Israel.  A fellow flagged us down and offered to take us to some viewpoints, because, he said, the view across the Rift Valley is not as good from the ruins.  We said yes, and for the next hour, Amjad showed us one jaw-dropping view after another, and although he’s usually an Arabic-only guide, his limited English, combined with his friendliness and knowledge of the military checkpoints and unmarked gravel roads meant we saw some very cool sights.   Here’s a google earth screen shot.  The lake at the top left is the Sea of Galilee, and the brown oval in the top center is the Golan Heights.  We looked down on Hamat Gader, which has hot springs, a water park, and an alligator farm!

Below is a view looking northwest toward the Sea of Galilee behind Lynnell.  Many of Jesus’ Disciples grew up on that lake, and were making a living there before he asked them to start fishing for people.  She’s pointing to the Golan Heights.  The road below, next to her right wrist, is the one we drove on to take the next picture (below). 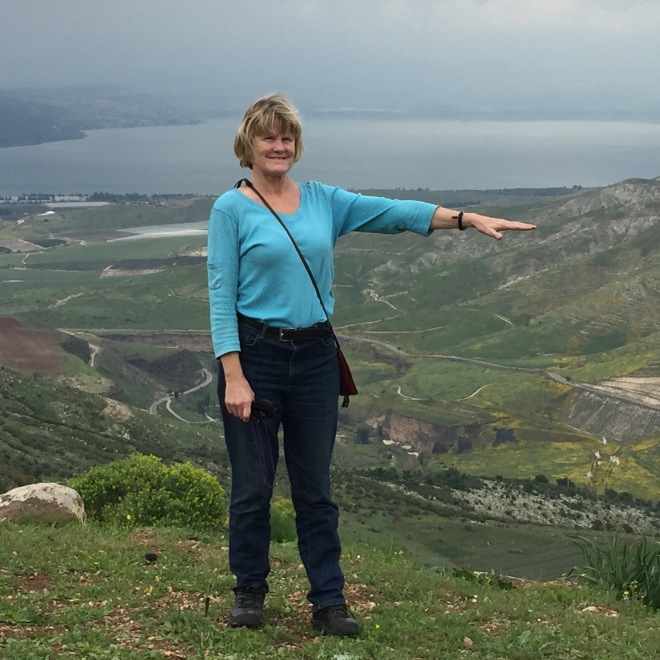 Here’s a later picture which we took from the much lower vantage point, looking in the same direction, with the sun trying to come out.

And then we looked back east, with the Golan Heights on the left and Jordan on the right (below).  If you squint or hit command+ a few times, you might be able to make out the NATO station in the DMZ at top, left, and the bombed railroad bridge in the valley, center right.  The Israelis blew the bridge in the 1967 war.  It had been built by the Ottomans.

It’s so amazing to be here.  We’re going to spend two weeks on the Jordanian side and then four weeks on the Israel side.  Our next stop is Jerash, a city with outstanding Roman ruins known as the “Pompeii of the East” and after that the Dead Sea, including very buoyant water, a spa with mud treatments, and the coolest mosaics we have ever seen. 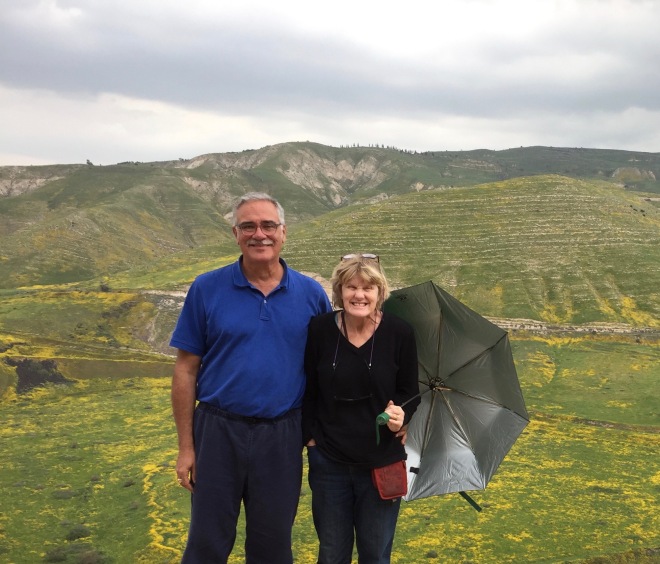 2 thoughts on “The Rift Valley & Its Tiny River Jordan”