Yesterday was our third day in Agra, former capital of the muslim Mughal Empire.  A brief history lesson: starting in about 900, various Muslim sultans and kings ruled parts of what we now call India, Pakistan, and Afghanistan, and fought each other.  Tamerlane and Genghis Khan swept through, pillaging and destroying, and a man descended from T on his mom’s side and GK on his dad’s seized Delhi in 1526.  He was the first Mughal: Babur.

On the map, courtesy of globalsecurity.org, his territory is the olive-green part.  His grandson was Akbar The Great, who extended the boundaries to the lighter green area, reaching the coasts.  Akbar is most admired by historians for religious tolerance, diplomatic savvy, and even the invention of a new Religion Of Religions, which took what he thought was the best of Islam, Hinduism, Christianity, Buddhism, and a cult of (his) personality.  He called it Din-i-llahi, “God’s Religion,” which is hardly a modest claim.

Akbar’s grandson, Shah Jehan, didn’t increase the territory of the Mughal Empire, but he spent lavishly on palaces, courtly life, mosques, and the famous tomb for his beloved third wife, Mumtaz.  The last great emperor was Shah Jehan’s son, Aurangzeb, a ruthless infighter who imprisoned his father and killed his brother.  His religious intolerance was ham-handed and smashed his dynasty’s carefully-assembled network of friendly interfaith and international alliances, and after him, a long, steady decline began at the hands of the British.

Back to Shah Jehan: he built the Taj Mahal as a mausoleum for Mumtaz and, eventually, himself.  It’s maybe the most beautiful building in the world.  The Lonely Planet Guide says so several times!  We sure loved the Sagrada Familia church in Barcelona and the Alhambra complex in Granada.

It works on so many levels:

As a sculpture, it sits on a ten-foot high marble base so there’s no background to distract you.  It’s perfectly symmetrical, a huge square set on that giant marble base with four minarets at the corners, and the building’s corners are sliced off at perfect 45-degree angles to make the whole thing rounder.  And then there is the dome and the smaller domes.

As a monument to Love, the Taj Mahal reminds everyone who sees it of the guy who built it for the woman he loved most.  He had many wives and lovers in his life, but Mumtaz was his treasure.  Imagine 22,000 workers spending more than a decade making the world’s biggest Valentine!  Lynnell immediately recalled the famous picture of Diana, Princess of Wales who, when visiting Agra with her soon-to-be-ex-husband Prince Charles, showed up for the couple’s scheduled photo shoot alone.  Charles was off making a speech.  In retrospect, the image became an icon of her brave loneliness and her tragic elegance: 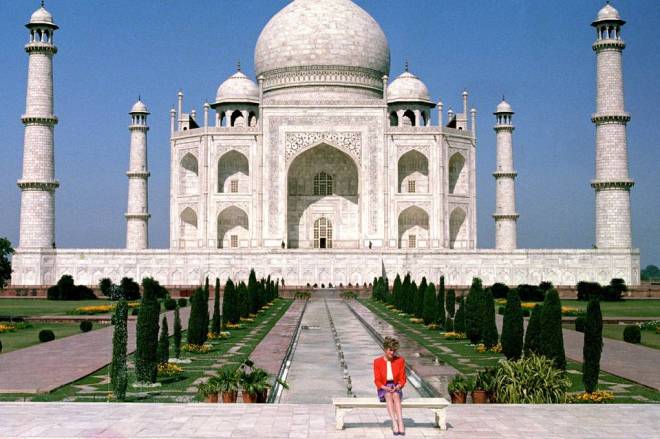 As a dark and somber interior, with almost no light except that which enters through carved marble lattices.  The inside is surprisingly small.  These monuments are not the real resting places of Shah Jehan and Mumtaz Mahal.  Those are sealed up under the base of the Taj Mahal.

As a landmark and a focal point, because so many other buildings in Agra have views framing it through prominent windows or arches.  Shah Jehan, imprisoned in the Red Fort just a few miles down the river, must have looked through the haze to see his beloved wife’s resting place many times a day.

As a teaching tool, inviting the visitor to read, and to consider their mortality and readiness to face an evaluation of how they’ve lived their lives so far.  The inscriptions (a) invite you to contemplate Paradise as you enter, (b) remind you that your words and deeds matter, and though your reputation with people is an indicator, your reputation in God’s Eyes is far more important, and (c) remind you of God’s Eternal Mercy if you surrender to Him, and (d) specifically commend Mumtaz Mahal herself to God’s Embrace.

As a decorated surface, like a page of parchment with flowers and stems as well as stunning calligraphy.  The black lines above and below, and all the designs, are inlaid.  That means someone chiseled the marble a few millimeters deep, and then glued in the proper color of semi-precious stone. Here’s a YouTube for any art nerds out there.  We saw a guy outside his shop two days ago sawing marble with a water-cooled circular saw, which people did not have in 1632-1643!   The first picture is a simple floral design from inside,

and the second picture is the west gate.

As one of the greatest works of Muslim religious art, because it avoids any depiction of human forms, relies on abstract beauty, including the letters of the Arabic language, which I started learning ten years ago in part because it is so fun to write the words! Spanish Christian Art, funded by crusaders and glorifying martyrdom, often repelled us with its gruesome depiction of martyrs, conquerers, and submitting Moors and Jews.  Hindu Art is often joyful, frequently playful, full of magic and symbols.   But Muslim art is so understated and elegant.  It takes some time to work its spell, but it wows you.

One thought on “Taj Mahal & Why It Works”