For this last week, after saying goodbye to Mackenzie, Jackson, and Will in the capital city of Rabat, we returned to Marrakech and checked ourselves into a wonderful campground. It wasn’t literally an oasis because, although dry, Marrakech isn’t in the desert. But figuratively, in the sense of “oasis: a haven surrounded by desert provided by the sufficient of water near or at the surface; a refuge.” Called Manzil La Tortue, it’s the brainchild of a Frenchman with a terrific eye for design. The paths are all shaded by vines, and gardeners tend olive and orange trees, roses, palms, cactus, and flowering plants we never learned the names of.

The metal doors and chairs have turtle motifs. The walls are made of Berber stucco, made with straw and red earth.   This is the swimming pool and the domed restaurant:

We did laundry and hung things in a tree to dry in the sun:

We saw the last yellow leaves of the autumn (on January 4th) clinging to their branches.

Driving south and east into the desert, we passed Ourzazate, the self-styled Hollywood of the Desert (Kundun, Lawrence of Arabia, Last Temptation of Christ, Game of Thrones, Star Wars locations), and came to a tiny and very basic campground. Okay, it’s more of a parking lot with a restaurant and an enthusiastic staff).  And a great view of a riverbed that’s dry in the summer, but in the winter stays trickling. 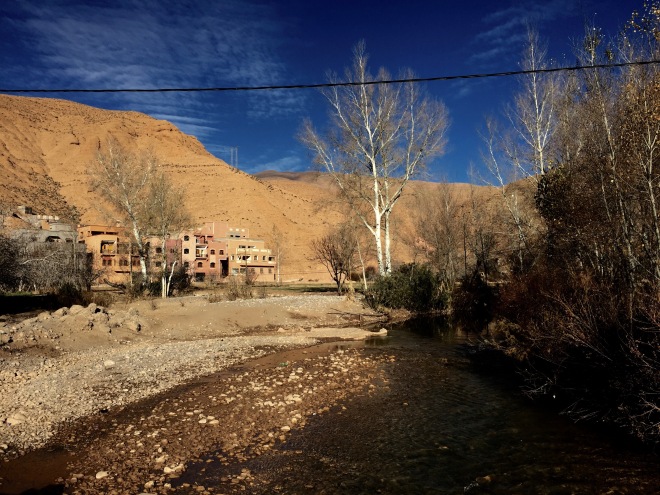 John had his second backing-up accident with the van. He messed up the bike rack, but it’s fixable. The next morning, we drove up the gorge of the Dades River and marveled at how much living people can coax out of the earth with just a little water. Here’s a village with terraced irrigated gardens and stands of fruit and nut trees.

Our next stop was the end of the road: Merzouga. Beyond the town is a series of dunes they call an “Erg” in Arabic. Beyond that, a line of mountains on the Algerian border.

Although the road had been mostly a strip of asphalt on a vast expanse of gravel for quite awhile, now we knew we were in the Sahara. There were camels and oases with palm trees and people of both genders with heads and faces covered against the blowing sand. A Swiss German couple we’d met earlier had recommended a certain place to stay, and we were grateful to be able to ignore the guys at the city gates waving for us to stop for valuable lodging and dining tips. Yes, towns in Morocco still have gates, but they appear to be always open.

Our hosts welcomed us, showed us a place to park, and then we went for a bike ride through the town. In the oasis, under the date palms, folks have garden plots for barley, carrots, onions, garlic, lettuce, and some things we couldn’t figure out, until a young mom named Mouna said hello and invited us to follow her. She took us along the irrigation ditches to her own garden, where she made up for our lack of a shared language by pantomiming sheep, pulling turnips to show us what was growing, and pulled out an old Nokia phone with video of her three sons. Naturally, we pulled out a picture of our own three sons. She’d bought a small bag of fertilizer in town and was walking to her home in the next village.

We returned to our hosts and made plans for a bit of camel-riding the next day.

and a longer 4-wheel drive tour of the nearby desert. Our guide, Ali, took us to see this vein of barium-rich ore being mined.  His father had once worked on the mines, with a French company which abandoned it in 1960.  Since then, freelancers have blasted and shoveled and smashed and sorted the rock, taking the white mineral and leaving the rest.  The vein is only about a foot wide. 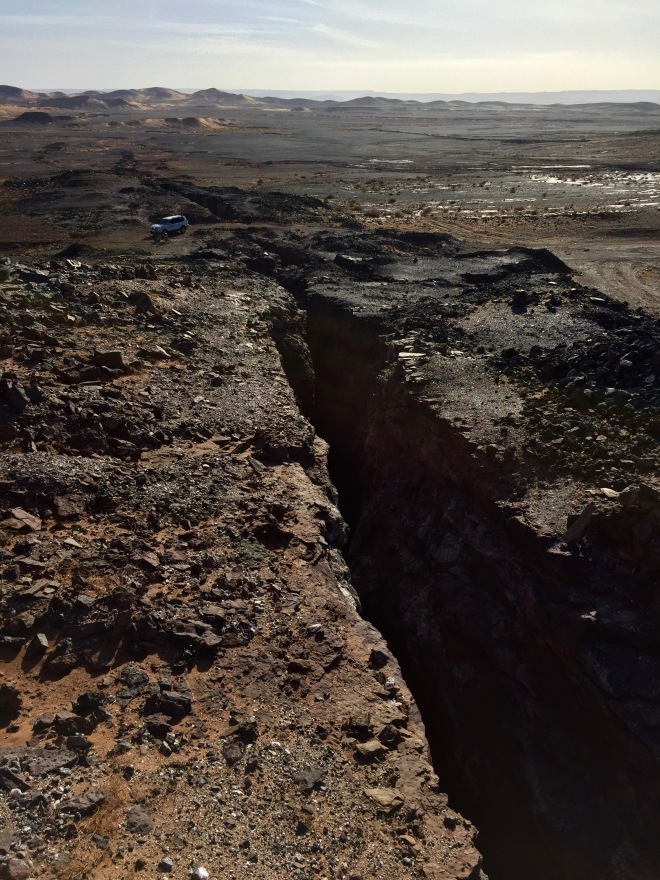 He also showed us a place where thousands of fossils like this lie everywhere on the ground:

We spent the night in a permanent campsite on the edge of the Erg, made mostly with Bedouin blankets. We settled into our room:

At sunset, we took this selfie. 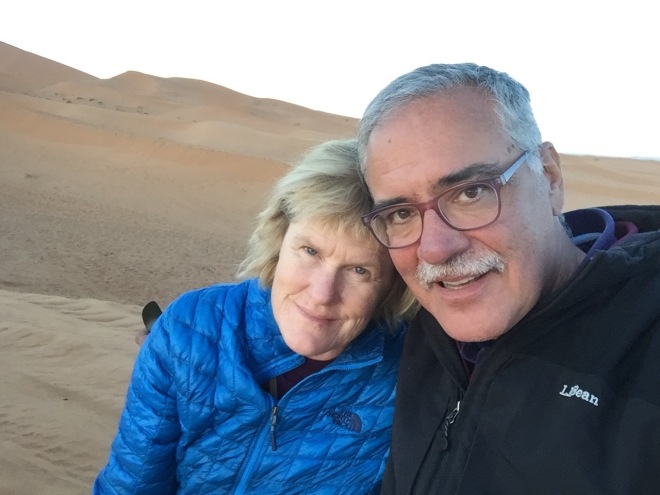 We had dinner with a great young couple from Australia–both actuaries–then went outside for a campfire and drumming by some young guides from the area. This side of the Erg has a half-dozen camps owned by hotels and inns, some smaller and some larger, but ours seemed to be the music magnet. We tried in vain to come up with a good, drummable American song, and the Aussies also failed. But the stars were amazing. John saw a couple of shooting stars later that night.

After breakfast back in town, we cleaned off the dust and drove north past this oasis:

There is actually so much life in what could appear to be a bleak, God-forsaken landscape.  Bleak? A little water judiciously applied can make the desert bloom.  And God-forsaken?  We cannot judge, but our hosts peppered their conversation with “God willing,” and “thank God,” and “God be with you,” so they clearly experience the Creator as alive and well and tending to life in the desert.

I (John) have often taught that our Abrahamic faiths sprung from the desert, and are thus based somehow on a spirituality of hidden bounty.  Jesus and Muhammad drew their deepest inspiration in desert retreats, and we were profoundly moved by the immense silence and brilliant stars.  At the same time, the drumming evoked heartbeats, dancing, and joy.  All over Morocco we saw people stretching irrigation hoses or making irrigation dams.  They have such  respect for water and patience: they wait for it and tend it like a living being.

You don’t want to lose the path in the desert.  Although there is plenty of life there, the source is often hidden far under the dunes.  Like a compass, God exists to orient us.  Whether we face the right path and find the next oasis or go astray and find ourselves panicked and anxious is up to us. 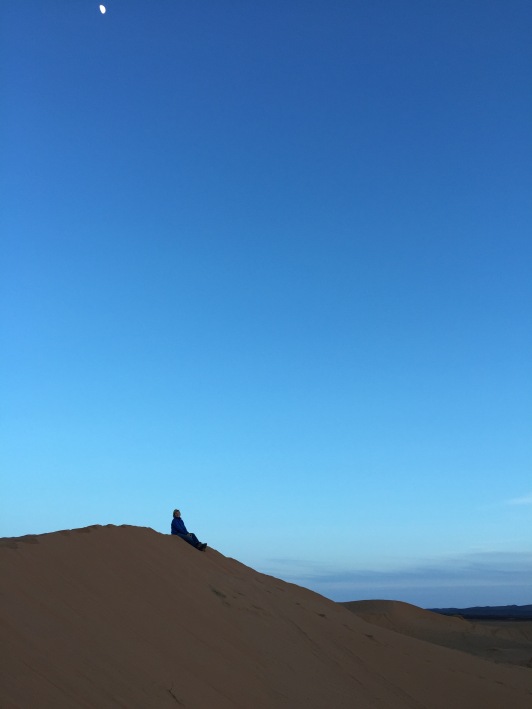 3 thoughts on “(So Much) Life in the Desert”