Well, it’s been almost two weeks since the election. We were in Madrid on November 8th–which is six hours ahead of New York’s time. So we  went to bed that night anxious but hopeful that the U.S. would soon be electing its first woman president and woke up to Trump.

Like almost everyone else we know, we were devastated. Numb. Nauseous.  Our first impulse was to pack up and go home because that’s what you do when someone you love suddenly dies, although in this case it was the country we thought we lived in.

But instead, we spent that Wednesday walking around like zombies in central Madrid. It was a beautiful, sunny day and a public holiday, so the streets were crowded with families and kids doing an extended version of the Spanish paseo, i.e. just walking around and enjoying the street and each other’s company. Their happy normality was both reassuring and a sharp contrast to the dread John and I carried.

I don’t know when I’ve felt this level of grief. It’s really physical and as everyone says, it’s not linear. I go up and down.  Sometimes I feel almost normal. Other times, my heart feels so broken and heavy, I can hardly breathe. As my late friend Denny Schapiro once put it, “I make the daily commute between hope and despair.” And a lot of times, I do wish we were home, gathering strength with our family, friends and political allies.

Yet it’s been instructive watching this unfold from Spain, a country that went through a bloody civil war from 1936-1939. The fascists won and General Franco ruled Spain with an authoritarian grip for nearly 40 years until his death in 1975. So Spain had the longest experience of dealing with right wing, religious, authoritarian rule of any other country in Western Europe.  Here I am asking a museum historian in Guernica about the complicity of the church in Franco’s authoritarian reign: 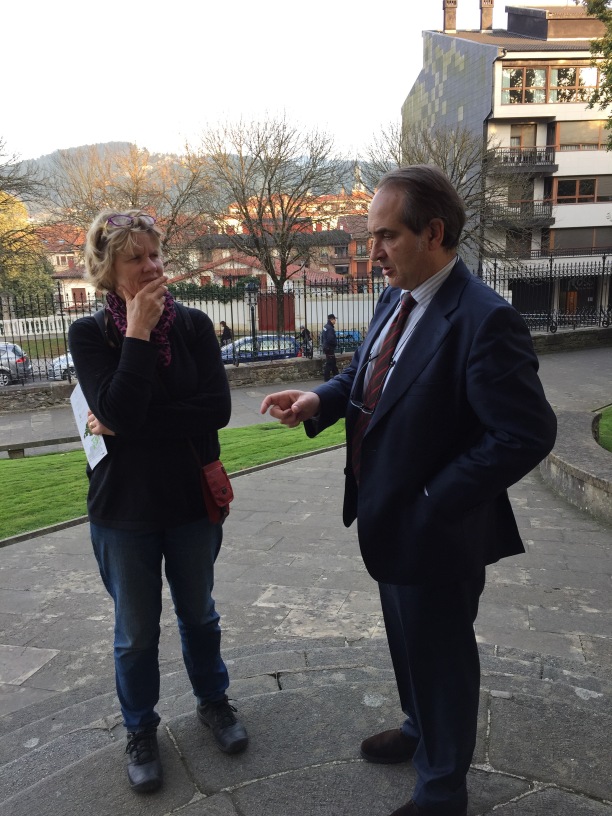 I knew very little about the Spanish Civil War before arriving a couple of weeks ago except that it was pre-cursor to World War II; Hemingway and Orwell wrote about it and Picasso painted “Guernica, etc. But here’s the gist: in 1936, a right-wing military and political class staged a coup against a democratically elected, center-left government. Historians say that in the next three years, about 500,000 Spaniards died– the equivalent of the U.S. suffering 5.5 million dead.  About 250,000 were murdered outright; the other half died of injuries, malnutrition and abuse. Another 500,000 people went into exile. Another 250,000 spent the next decade in Franco’s gulag of labor camps.

Did you know this stuff? I didn’t. Growing up, I read endless stories about repression in the Soviet Union, Eastern Bloc and China–which really were bad. But I knew almost nothing about right-wing repression because during the Cold War, authoritarians who were anti-Communist pretty much got a free pass from our government and the media.

And Franco’s regime was really bad. At one point, he announced he’d be willing to kill one-third of the male Spanish population if that’s what it took to “purify” Spain of its leftist tendencies. Franco didn’t just want to roll back 100 years of 20th century progress. He wanted to take Spain back to the pre-Enlightenment days of 1492, i.e. when Ferdinand and Isabella presided over a powerful  theocracy, with the Catholic Church controlling every aspect of life; wealthy people operated with impunity and Jews and Muslims were expelled.

It was Franco’s version of “Make Spain Great Again,” except instead of greatness, he turned Spain into a corrupt backwater, frozen in time.

So here are three lessons that I’ve thought of while reading Spanish history after the election.

1) When you’re up against a ruthless right-wing authoritarian regime, you really don’t have the luxury of lefty internal battles and utopian schemes. Franco and his followers were vicious, well-armed and organized. In contrast, the Spanish left fractured into various splinter groups and spent an enormous amount of time fighting each other, pursuing anarchist utopias and refusing to compromise or cooperate.

Maybe Franco would have won regardless—after all, he had the support of most of the military plus Hitler’s Luftwaffe. But the divisions on the left were a disaster.

My son who lives in New York City says he was stopped on the street the other day by a young guy trying to sign him up for the Socialist Party who instantly launched into a rant on how Bernie Sanders had sold out. There are still people on my Facebook feed who want to re-litigate Hillary vs. Bernie. People, please. We don’t have time for this any more.

2) We must commit ourselves to non-violent resistance…. because it’s both morally right and more politically effective in the long run. According to historian Anthony Beevor, the Spanish left killed roughly 36,000 people, including 7,000 priests and nuns, mostly in the first year of the war. Anarchists also burned churches and desecrated graves. Their actions were morally repellent and indefensible.

Meanwhile, Franco’s forces murdered six times more people, over 200,000, including priests and nuns not considered sufficiently loyal. At one point, the right wing vowed to kill 10 leftists for every fascist death…and if you add in the people Franco imprisoned and exiled, the right wing basically met its ten-fold goal.

And yet the two sides were routinely portrayed as morally equivalent or equally dangerous.

Violence is wrong no matter who does it.  Which is why non-violence needs to be a key principle especially for those of us who fight to uphold the norms of a democratic, civil society.

3) In the long run, fascism can’t be sustained. Resurrection happens. Under Franco, the laws passed by the previous left-center government were declared void. Unions were suppressed or banned. Men suspected of being gay could be killed. Franco outlawed divorce, contraception and abortion. Women were not allowed to become university professors, judges or testify in court.  In the early years of the regime, church attendance soared because local priests reported the names of people who were lax at attending mass—which was enough to get you tagged as a leftist and arrested.

I could keep going. It was an endless list of terrible policies.

Franco spent four decades trying to shape Spain into his conservative, religious vision.  . But almost soon as he died in 1975, Spain began rapidly shifting into the modern, progressive, secular nation it is today. Nearly  everything Franco tried to prevent came into being…at a speed which seems astonishing, given what the country had been through. Gay marriage is now legal in Spain. So is abortion. Spaniards rarely attend church. And they are fiercely devoted to democracy—they want to vote on everything.

I don’t write this to say that there was no cost or that the recovery was easy or even complete. The human toll from Franco’s rule was huge and horrendous and the Spanish mostly still don’t talk about it. “My grandfather was shot by Franco’s troops,” my neighbor at a campground told me. “He was hauled out of his house, lined up against the wall and killed, simply because he was considered an educated man and therefore suspect.  But as Spaniards, we still don’t usually discuss it because we never know whose relatives were on which side of the rifle.”

So Spain is hardly perfect. And yet…. there are no monuments to Franco.  No streets named after him. No statues.  A few days before the US election, we visited Franco’s grave at the infamous “Valley of the Fallen” where Franco forced his political prisoners to build him a massive dark tomb in an underground cathedral. The place reminded me of the long hall in The Wizard of Oz—it was that gloomy and foreboding. We were there on a sunny weekend day and the place was nearly empty. John noticed with satisfaction that the cave-like building was leaking—there were buckets everywhere.

I  don’t want to minimize what’s ahead for the U.S. We are entering into a dark period, although hopefully not as horrific as the Spanish Civil War. But some of the most vile people in America now have their hands on the levers of government power and terrible things will be done.

But if we’re looking for hope…..well, Spain does teach us that fascism doesn’t last. We will need courage, unity and spiritual strength in the days ahead. But resurrection does happen….at great cost and not fast. But it happens.

4 thoughts on “Reflecting on Trump from Spain”