Back in the last century, John and I used to travel around using folding paper things called maps. Yes, I know. We’re that old.  But now, only six weeks into this trip, we’ve become total satellite navigation freaks, barely willing to move unless the robot lady in our Garmin device tells us it’s okay. 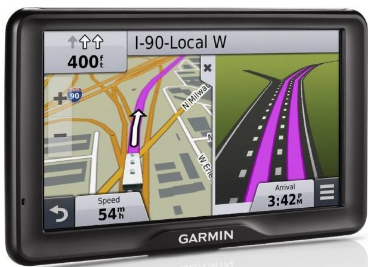 I’m a newbie to sat-nav devices, mostly because none of cars we’ve ever owned came with one. Back home, if I needed directions, I just used Google Maps on my smart phone. Which worked fine— as long as I could get a cell phone signal and didn’t leave the country.

But now we’re frequently off the beaten path, out of cell phone range or crossing borders.  For example, two weeks ago, when we crossed over to Ireland our British SIM cards instantly went kaput. No data. No calls. No texts. No Google maps.Fellow travelers had warned me about this would happen, which is why I bought a Garmin device, pre-loaded with UK and European maps.

Which is how we ended up traveling with Toni, which is what we call our Garmin robot lady. It’s short for Antonia, female version of Anthony, the patron saint of finding lost things, people or places.

Every morning, we plug in our destination and Toni starts talking.  “At the roundabout, take the third exit,” she’ll say in her crisp British accent. She always sounds calm, professional and mature, but not too mature, more like in her mid-40s, i.e. before peri-menopause renders her too spacey or irritable.

Sat-nav isn’t perfect. Sometimes Toni says turn right when she really means turn left. The first time this happened, we spent about ten minutes continually looping through the same intersections in a mid-size city before we realized that even a professional British robot lady can occasionally get confused.  We’ve since learned that when there’s a conflict, we should follow the Sat-Nav graphic map, not Toni’s voice.  But mostly her record has been pretty good….unlike another robot lady.

At the beginning of our trip, we spent two days in a rental car that came with its own built-in satellite navigation. We used the rental car to drive from central London down to southern England where we picked up our campervan.

I always knew the drive out of London would be hellish. London streets are narrow and twisting; they change names every five blocks; and the traffic is horrible. Plus, we were driving an unfamiliar rental car with manual transmission. This is Britain, so the steering wheel was on the right and the stick shift was on the left, so shifting seemed particularly tricky, especially since London can be surprisingly hilly and I kept killing the engine in stop and go traffic on the steeper streets.

In short, it was already a shit-show. But then the sat-nav robot lady decided to really screw with us. It was as if there was something buried deep her settings that said, “Take every back street in London before leaving town.”

So I’d do it. It was the most insane route and it kept changing, maybe in response to traffic jams or detours or maybe because the robot lady was one sick nut job.

“Turn right at the corner,” the robot lady would order.

“It’s another back alley,” I’d wail.  (Note: vehicle in photo is NOT our van.  Our van is blue.  Alley width is, however, typical).

“Just do what she says,” John would say, as if she had us at gun-point and he didn’t want anyone to get hurt.

After two hours of this, we were beyond lost. But what could we do? We didn’t know London. We didn’t have decent maps. We didn’t know where to buy a decent map. And even if by pure luck, we had somehow driven past an actual map store, we’d never find a parking spot, especially for our big van.  (Note: this is obviously not our van). 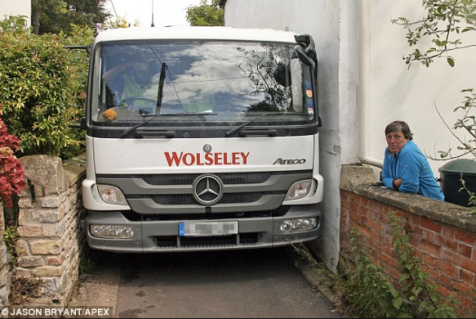 To this day, we’re not sure how we got out of London. We never acted like free, independent adults; we just kept slavishly following her. So maybe the robot lady just got bored with toying with us. But anyhow, hours later, we eventually got to the town in southern England where we turned in the rental car and picked up our van and started using our Garmin device which featured the far nicer and more competent Toni.

But still, the rental car fiasco left me with sat-nav trust issues. At first, if I had access to a cell phone signal and my British data plan was working, I’d secretively type in the address in Google Map, just in case Toni decided to become evil.

Our campground in Killarney, Ireland for example, came with the following official address: Lissivigeen, Killarney. That’s it.

Which is apparently, that’s enough for the Irish. But the Garmin rejected it, insisting we put in something more detailed. Trying to appease the device, we typed in GPS numbers from a “Best Campgrounds in Britain” book and soon Toni was giving instructions in her usual clear, confident voice.

The first 200 kilometers seemed to go okay. But then the route kept getting stranger and stranger. The sun was going down. We were now 40 minutes past the town of Killarney, being directed down roads that kept getting more and more narrow and rutted. Hmm, we thought, maybe this campground is lot more remote than it sounded.

Then we heard Toni utter these fateful words: “Navigate off the road,” she demanded.

We had arrived at an empty field.

We now know that “Navigate off the road” is right up there with “Drive directly into the sea.” It’s what Toni tells you when you’re totally screwed. 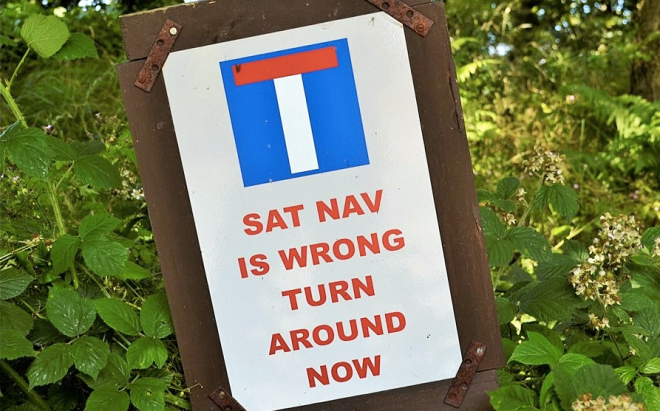 So we turned around. By the time we eventually found the campground on our own, it was dark and we were exhausted and hungry.  ”The GPS numbers for your place in the campground directory are wrong,” I announced, somewhat hysterically to the man at the campground desk who paid no attention to what I thought was crucial information and began instead began talking, in a very precise, sort of Asbergery way about how the campsites were laid out and how the showers worked.

After the London and Killarney campground disasters, I was done with Sat-Nav robot ladies. “They’re sociopaths, “I told John. But he defended Toni, saying it wasn’t her fault the GPS numbers in the campground guide were off and that I was being unreasonable.

As a compromise, we started buying some basic road maps, sort of like a security blanket, so we could at least have a general idea of where Toni was taking us and feel less like utter sat-nav slaves.

And since then, the last two weeks or so have been pretty smooth sailing, In Wales, we were impressed that Toni tried to pronounce the names of Welsh roads. “Turn left on Eglwyswrw Hwtra” she’d say.  (Which means, and I am not making this up, “Church Street.”)

It mostly sounded like she was gargling or clearing her throat. But still, I was usually too intimidated to even try to pronounce Welsh—I just went straight to throat clearing, so I gave her prop for that.

The other day, Toni suddenly announced, “Turn left at the white building ahead” and John and I were slack-jawed.  Toni had never mentioned the color of a building before. Heck ,we didn’t even know she could see colors.

So far, she’s never mentioned a color again, so we’re still mystified. The other day she said, “Turn left at the knife point.” We looked. No knife. No point.  But we turned left anyways and it worked. The next day, she said something about a knife again.

“What’s with this new obsession with weapons?” I asked.  Then she got quiet.

7 thoughts on “Travels with Toni, Our Sat-Nav Robot Lady”