Next week, after our family members have gone back to their homes after this weekend’s memorial service for my mother-in-law, I’m going to take a short trip to Omaha.

The Tri-Faith Initiative was conceived by civic-minded religious leaders on the eastern edge of Nebraska.  When the buildings are finished, a synagogue, a mosque, and a church will share campus space on what was once a golf course.

The three faiths all trace their ancestry to Abraham: 3800 years ago, he took his wife west to begin a new life, convinced that God would show him a new land and give him descendants as numerous as the stars.  Up the Fertile Crescent they traveled, to the Promised Land as well as to Egypt and Arabia, living as nomads most of the time.  In that respect, Lynnell and I will be imitating them for the next year.  Now he is honored by Jews, Christians, and Muslims around the world.

There is plenty of disagreement about the specifics of his life.  The Old Testament says he nearly sacrificed his second son, Isaac, to prove his obedience to God, and that his wife Sarah, Isaac’s mother, never lived with Abraham again after that.  Christians say that Isaac was a foreshadowing of God’s son accepting death.  Muslims say that it was Ishmael, Abraham’s firstborn son whose mother was the servant-woman Hagar, and that Ishmael volunteered for the grim duty.  The Biblical holy places are in what would become Israel, but the Qur’an describes Abraham and Ishmael rebuilding the Ka’aba, the Stone House in the center of their holy city of Mecca.  This is an architectural rendering of the mosque now under construction in Omaha. 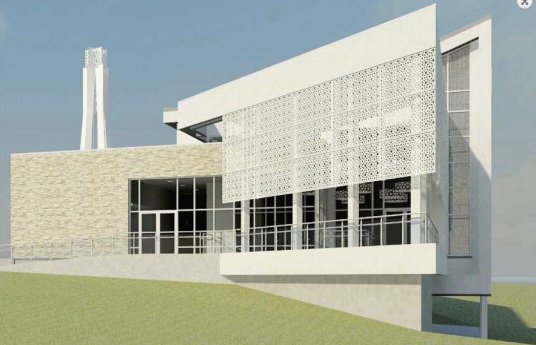 People often use religious traditions to separate themselves from one another, but there is an awful lot of common ground among these three faiths: ideas like creation of a good universe out of primal nothingness, disobedience by the first human beings which caused alienation from our creator ever since, a series of leaders including Noah, Abraham, Moses, and the prophets, a tradition of scripture emphasizing both justice and mercy, and ethical codes.

Setting aside for the moment all the scriptural warrants for ethnocentrism and intolerance–not easy to do–it’s very important for us to stand on that common ground.  That’s what the folks in Omaha are doing.  Here’s  a photo of the beautifully sunlit gallery of Temple Israel. 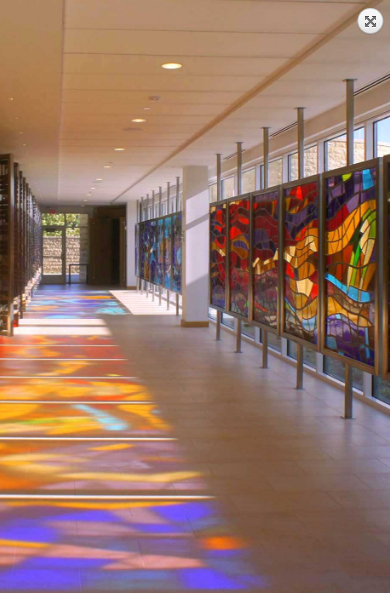 I will be meeting with leaders of all three congregations, touring the only finished building (Temple Israel), and walking the building site of the mosque.  The Christians are lagging behind a bit, as a result of a change in leadership: the Episcopal Church had planned on being the third partner, but last year gave way to the UCC, who will relocate Countryside Church a couple miles to the new site.  I am curious to find out how that all happened.  My Episcopal loyalty feels a twinge of regret, but I’ll put denominational partisanship aside.

Below is a conceptual drawing that Countryside UCC is working from.  The diagonal axis points to the center of the campus, around which all three buildings will cluster. 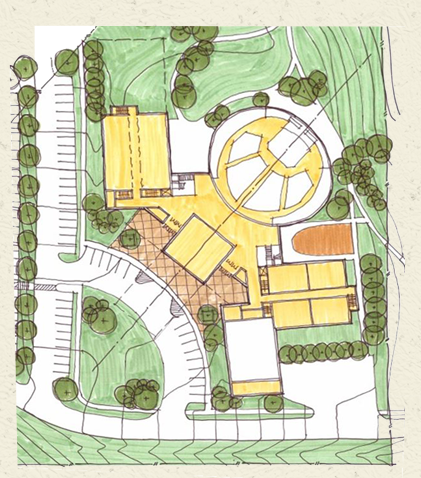 During the summer of 2017, we may visit an even more ambitious tri-faith initiative, The House of One in the former East Berlin.  With help from the Federal government of Germany, where religion is state-supported anyway, a group of idealists has designed a four-house worship and study community and hired a rabbi, a pastor (Lutheran, of course!) and an imam.  Here’s the plan: 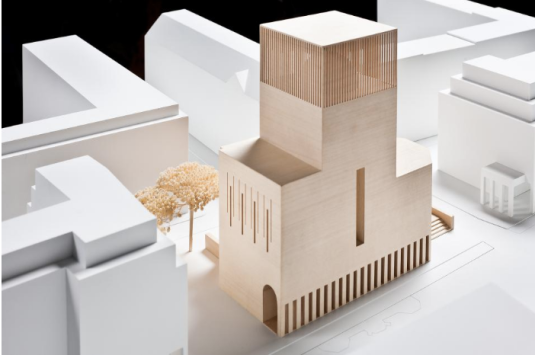 The columns on street level reveal the ruins of a church bombed in World War 2.  The arched door on the left is the entrance to the mosque.  The Christian space will be on the far side, and the synagogue will be on the right.  A very tall central tower will allow views all over Berlin, and there will be a huge green sphere, barely visible inside the tower in this picture.  I imagine the sphere symbolizes this fragile Earth.  The central tower will feature a common hall which will be quite spacious and big enough for common gatherings to include, as they put it, people who have no particular beliefs as well.

In the photo below are members of the Omaha Tri-Faith Initiative.  Maybe I will meet some of them next week. I am keeping them all in my prayers.  They are really doing the Lord’s work, difficult though it may seem.  But I bet it’s not that difficult.  Making friends, sharing meals, getting excited over construction plans–all that sounds like fun.

One thought on “House and Houses”